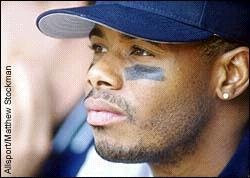 Wow, there have been some huge moves in the past couple of days as the trade deadline is here...Griffey to the Chi Sox and now Manny to LA!
Junior finally has the chance to get a WS ring...not if the Angels keep it going the way they have. But he has at least a better chance than with the Reds.
Coletti must really want to win...it's been 20 years since the boys in blue have won their last WS. But Man Ram? Yes, he's a pretty sweet addition, but can the classiest, most talented manager, Joe Torre tame him? Everyone knows he has had his antics, as my better half says it best, calling him a "loose cannon." The 2004 WS MVP finally pushed Boston to just dump him off onto the Dodgers for an unbalanced deal. I hope that the Dodgers don't allow his bad behavior to continue by making excuses like Boston saying "oh that's just Manny being Manny." It's like when I was a kid and my lil' bro would copy everything that I did and said, and my Italian mom would make the excuse for him saying "that's just how he learns." Will Manny bleed Dodger blue if he chokes and tackles Tommy Lasorda? I guess if the Dodgers acquired Milton Bradley a few years back and onto now another loose cannon...they won't mind his antics too much. Good luck LA! If he plays ball the way he is capable without any Manny being Manny BS, it very well could be a freeway World Series. The Bo Sox are probably better off with Jason Bay in LF, less of a hitter, but less babysitting issues too!

This is my first blog entry...so I'd like to thank you for taking the time to check my blog site out. I will post more, as I learn how to use this site.
Posted by Junior75 at 17:25 No comments: