Team USA did it! They beat Japan 4-2 in 11 innings to clinch the third seed in the semi-final round in Beijing. The U.S. will play the defending champions, Cuba, tomorrow in the semi-final round. Cuba is 6-1 in the Olympics and the U.S. has a record of 5-2. The unbeaten 7-0 Korea team is the top seed, and will face the fourth seeded 4-3 Japanese team. The two winners of the semi-finals will advance to the finals to play in the gold medal game, and the two semi-finals losers will duke it out in the finals for the bronze. 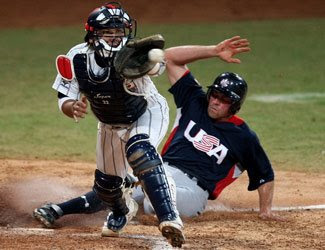 This should be an exciting finale of Olympic baseball, unless the IOC changes their mind in the future to keep baseball and softball in the olympic games. But unfortunately, the outlook isn't good for the London games in 2012, as the IOC stated that the sports of baseball and softball aren't international enough. They said that they are too American...maybe the sports just aren't European enough to appeal the French lead IOC members! Why not get rid of ping pong or diving...they look too Chinese! Baseball looks pretty international with the strong, pasionate Asian and Latin countries to me, but I must be crazy to disagree with Jacque and the IOC!
Posted by Junior75 at 10:17 No comments: 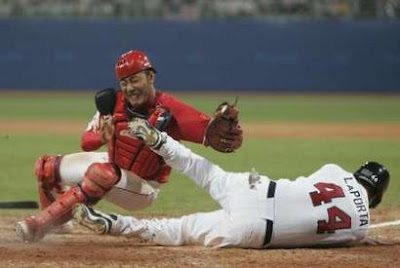 Talk about wild...Looking more like an ice hockey game than a baseball game...Team USA and China were beating each other up in their match up in yesterday's game, where the U.S. won 9 to 1. There were a couple of hard home plate collisions by the U.S. into the Chinese catcher, and a retalitory head hunting bean ball by China. With today's win versus Chinese Taipei, the U.S. only has Japan left before the semi-finals take place. U.S. is tied with Japan with 4 wins and 2 loses a piece. Japan routed China in today's game 10-0. South Korea seems unstopable with a perfect 6-0 record and Cuba has only lost one game (to Korea 7-4) giving them a record of 5-1. The competition remains fierce, but I have faith in our boys that they will pull off a medal...hopefully gold, but even a bronze would make me proud of our team!
Posted by Junior75 at 07:52 No comments: 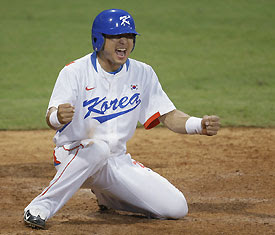 Team USA was upset yesterday by South Korea in their first game of the Olympics. South Korea scored 2 runs in the ninth to win 8 to 7. The Americans need to really step it up a notch because their schedule gets even tougher, with Cuba and Japan on the horizon. Hopefully this was a HUGE wakeup call for the U.S., because this is their last chance for an Olympic medal ever, unless the IOC changes their mind.
Here's the U.S. baseball team's Olympic schedule:

Just when things were really heating up in the NL West race, the D-Backs went out and got Adam Dunn from Cincy...his bat makes the desert snakes even more unstoppable in the chase for the NL West Division crown. I hope that the great Giants of Nor Cal can make a run and catch up, but if they don't it's cool, just as long as LA doesn't make the playoffs either. The Giants don't really have enough depth to make the playoffs, especially now that they have to compete with an even stronger D-Backs team...none the less, it's gonna be an intersting rest of the season!
Posted by Junior75 at 16:42 No comments: 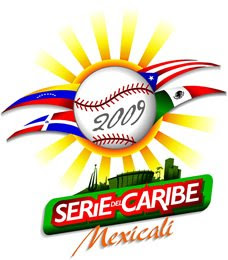 The international baseball scene just keeps heating up, with the recent announcement of the location of the 2009 Carribean Series...it's going to be in Mexicali, Mexico in February. That's right, just right across the border from Calexico, CA! We are definitely not going to miss this one, as I have been a fan of the Serie for the past couple of years watching them on ESPN Deportes in 2007 in Puerto Rico and in 2008 in the Dominican Republic. If you aren't familiar with this tourney, it currently consists of 4 carribean country teams: Dominican Republic, Venezuela, Mexico, and my fav Puerto Rico. Panama and Cuba have participated in the past, but haven't been active in recent years. Due to financial reasons, Puerto Rico did not compete this year, but they should be back in full force in '09. (Note: Domenican Republic had 2 teams in the '08 tourney due to no Puerto Rico team). We will be there live and in person this time to shout out "sientate!" at the batters when they strike out...instead of yelling it out in our living room at the TV. The latin baseball games appear to be like a huge party in the stands with loud music, hot women dancing around on top of the dugouts, funny looking mascots cutting up, and a lot of whistles and cow bells in the crowd. It will be much different than what I am used to seeing at games here in the good 'ol US of A. It should be a pretty cool experience and will get me ready for the WBC, which starts a month after.
Posted by Junior75 at 16:22 1 comment: 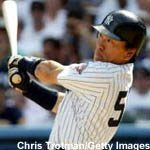 Great news...the great hero of Yakyu, Hideki "Godzilla" Matsui, began taking BP and a running program yesterday to rehab his knee. The Yankees should have his much needed bat back in LF or at DH just in time for their push to make the playoffs!
Speaking of Gojira (that's Japanese for Godzilla), my best friend and I are going to Little Tokyo in dowtown LA tomorrow to buy a Godzilla DVD or two to add to my collection and then it's off to enjoy a nice hot tasty bowl of ramen at a noodle house in J-Town! I'm very excited to go, because I haven't had a good bowl of ramen in years, and it'll be the wifey's first time having it. Some of my co-workers highly recommended a spot for us to go, so hopefully it'll be a good one. I'll let you know how it turns out in tomorrow's blog posting.
Just keep on keepin' on...
Posted by Junior75 at 12:44 No comments: 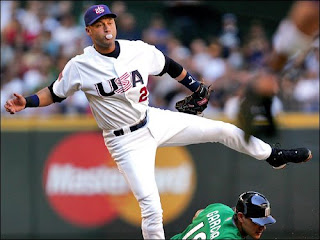 I'm already getting excited. It's almost that time again...the World Baseball Classic is coming back to a ballpark near you in March 2009. That's right, it's a year early this time, but who cares, the world's best will be competting on the international stage! We had a blast at the 2006 WBC at Angel Stadium. There's even some added excitement with new venues for this year...Mexico City, Toronto, Miami, and the finals are going to be held at Dodger Stadium. The repeat venue locations will be in San Juan, PR, San Diego, and Tokyo, Japan. This is like the World Cup, but better because it's baseball. Let's hope that Jeter and Team USA will do better this go around. They played very poorly, embarrassing themselves in the Inaugural WBC in '06...I mean for Pete's sake, it's our national pasttime! The competition will be fierce with the Dominican Republic, Cuba, and the '06 WBC Champs Japan going for the title. We will be at Chavez Ravine cheering on our beloved US team chanting USA, USA, USA!!!

Speaking of USA on the international baseball scene, the US Olympic Team has high 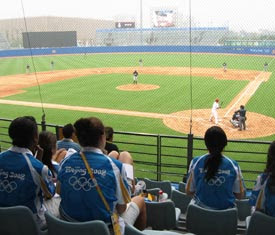 expectations to win the Gold! Let's root on our boys while they compete in the last baseball olympic competetion over in Red China. Hopefully they won't come back with black lung disease or food poisoning! 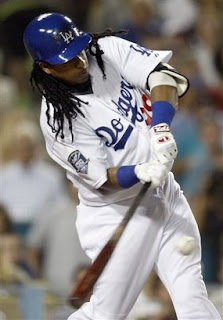 Okay, so I went to the game last night with my wife and good life long friend, who has Dodger season tix up in the "Blue Heaven" section...thank again Bertie for inviting us! I have to admit, after seing Manny again in person (the last time was at Fenway in '07) I am a Manny fan. I mean, how can you not be? Even if you don't agree with his off-field antics that he subjected the BoSox managment to, he has got to be one of the most colorful and exciting players to watch and cheer for. It is way easier for me to cheer for him now that he is out of the Al East. But seeing how the LA fans embraced him right from the get go and there were so many people adorning brand new Man Ram player tees, it was pretty cool. I wish that I could get a high five from him, but he couldn't possible reach me up in the top deck area. Manny was even playing some decent defense in the outfield. The Dodgers pretty much won the game last night because of Manny's bomb that he launched into the LF Pavillion...he will definitely help them into the playoffs this season. ..I just wish that he'd hurry up and change his jersey number!

Wait a minute...there's only ONE number 99 in LA. The Great One, Wayne Gretzky! What's Man Ram thinking picking that sacred LA number?! Is he trying to tell us that he is the Great One? Hardly! He couldn't even hold Gretzky's jock strap. There he goes, already pissing some LA peops off, or at least he's pissed me off with that arrogant move. 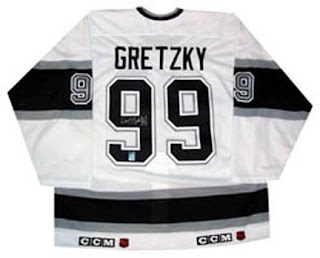