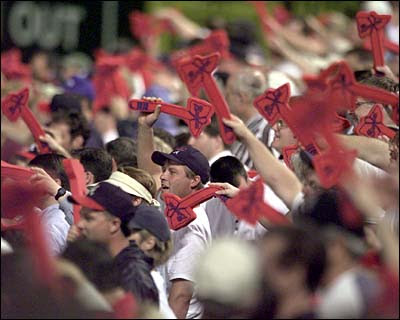 I just found out that I get to go to Atlanta for a work conference in June. And the best part of it all, the Yankees are in town that week playing the Braves. I've never been to Atlanta, and I am definitely going to one of the night games at the famous Turner Field. Woohoo!!! Another ballpark to cross of my list. I will be at 18 out of 30 current stadiums...only 12 more to go, that is until they tear down some of the current ones and build new ones. Then I have to go to those too! Which isn't a bad thing at all. I love traveling to new ballparks!!!
Posted by Junior75 at 10:01 No comments: 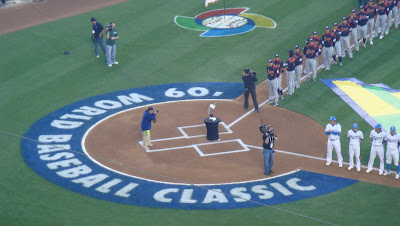 Man I miss the WBC!!! The new season has been kind of drab so far. I was excited about today's first Yankees win at home, and I enjoy that my NL wild card prediction, the Marlins are doing really really well, as in the best team in MLB right now well. Going from the WBC to April's regular season games is like running full speed for a marathon, then going down to a jog for a few miles. The excitement, the fans, the pride, and the flags are missed. I know that this will change as the season gets going and starts to really heat up, but it's difficult to think that I will have to wait 4 years from now to see the next tourney. I wish that it was every other year...oh well, needless to say, I had a blast watching the games in person and on tv. I got some nice souvenirs (photos, a few t-shirts, an autographed team Italy ball, a game used ball from Venezuelan pitcher- Hernandez, and a custom Italia BP jersey). As you can tell, I love the WBC and can't wait until 2013 ! 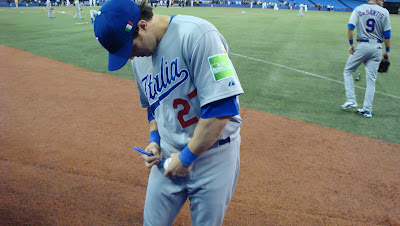 Some bloggers like Sully "demands" that fans like me have forgotten about the '09 WBC and think that we came to some realization that the tourney was only "spring training" and "meaningless." If only they watched some of the tourney's play, they would realize that it's a very meaningful thing that Bud Selig created to promote the game of baseball to the world. They would have probably enjoyed the high level of play that 15 of 16 teams displayed in honoring their countries. It's sad to think that people are that close-minded to not even give the WBC chance. They probably wouldn't like watching the Caribbean Series either, because it's not part of the 162 game regular season. I only hope that people give it a chance in 2013. I promise that they won't be disappointed in what they see! 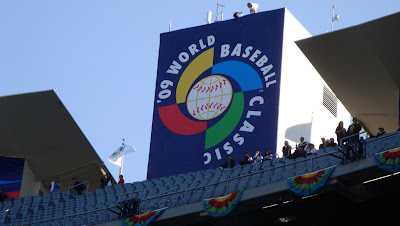 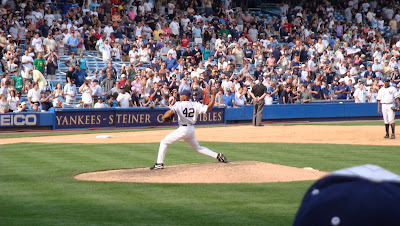 The ghosts from 161st and River must have finally strolled across the street to the new stadium because it was just like the good old  days today in the Bombers first win in their new home. It was a tied game in the bottom of the 8th and Mr. November, Derek Jeter, laid down on a fastball to go yard for the Yanks 5th RF homer of the day. Half an inning later, the Sandman, Mo Rivera,  entered that game to close it out.  It was a great day in Bronx baseball, especially since the day before the Yankees got spanked by Cleveland in their home opener. Let's hope that this is a sign of what's to come the rest of the season!
Posted by Junior75 at 16:40 No comments: 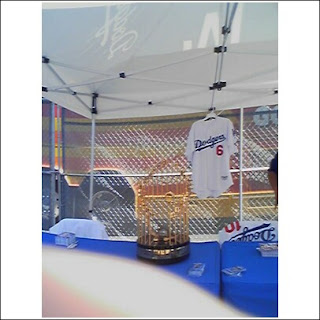 Okay my friends....what's with the crappy blowouts today??? The Yankees are losing 15-5 in the 8th inning right now to TB. Also, I went to the Dodgers home opener today versus the Giants. The Blue Crew beat the Giants 11-1, handing their Bay Area rivals their 4th straight loss. Big Unit pitched horribly. He gave up 7 runs total (6 runs in the bottom of the 5th). It was cool going to Chavez Ravine for the Dodgers' Opening Day with my friends Robert and Moon. We had a great time watching the opening festivities, seeing the 1981 WS trophy on display, seeing Tommy Lasorda, Fernando Valenzuela, Manny being Manny, and Vin Scully throwing out the first pitch. Their was a B-52 Stealth Bomber fly over the stadium with fireworks, doves being released, and fans in high hopes for their team who had a heartbreaking loss last season in the NLCS. Not to mention seeing Orlando Hudson hit for the cycle. He is only the 2nd LA Dodger in history to do it. The last was in 1970...way to go O-Dog!!! It was cool seeing to potential Hall of Famers face each other (Manny vs. Randy Johnson). I only wish that the final game outcome was completely different...oh well, it's going to be a long season! 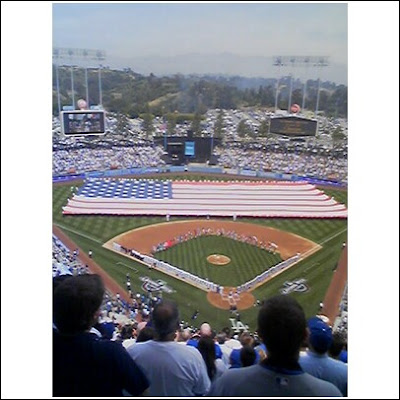 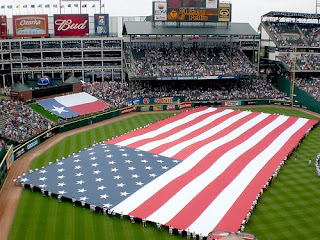 My friends, it's finally  here, only a few hours away. The best day of the year, Opening Day...a fresh start, a new beginning, a new hope, everyone's record is equal. MLB has decided to continue with it's Opening Day patriotic themed ceremonies, which is always very fitting since it's America's favorite past time! You can't get more American than baseball. I LOVE BASEBALL!!!
So before today's games begin, I am making my predictions for this year (just don't go to Vegas with them, considering my predictions track record). I am pretty confident with these picks this year.
AL
East- Yankees
Central- Indians
West- Angels
Wildcard- Red Sox
NL
East- Mets
Central- Cubs
West- Dodgers
Wildcard- Marlins
World Series
Yankees beat Cubs in 6 games to capture their 27th title in their history.
Posted by Junior75 at 11:53 No comments: 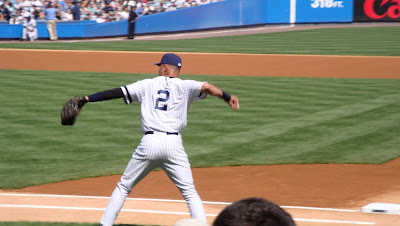 Well peops, it's official. The first game is being played in baseball's new cathedral. It just started and Jeter led off for the Yankees with a double. This gives him the last Yankees at bat in the old stadium and the first Yankees at bat in the new park. Pretty cool...I am so excited about the new season starting in two days. The new stadium looks beautiful. It better be, due to it's billion dollar price tag! For free, MLB.com is showing all of this weekends NY home games for the Mets and Yankees to show off the new stadiums in NYC. I can't wait to go back this September to see both stadiums first hand. I just bought our Yankees tickets online last week and our behind the scenes tour tickets of the Stadium. I haven't bought our Mets tix yet, they haven't gone on sale yet...not really sure what the hold up is over in Queens, but Opening Day is only 2 days away...hmmm? From what I have seen so far by watching the game vs. the Cubbies is that the friese and monument park are still a part of the Yankee stadium tradition. the big change is the huge Sony scoreboard screen in CF...wow, it's gotta be the biggest one in the Majors! Have a great baseball viewing weekend my friends! 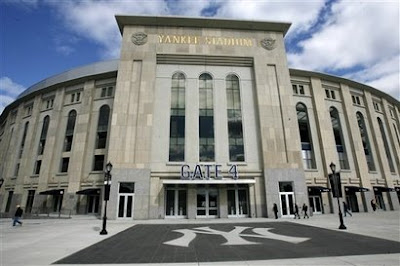