Well the Yankee captain finally revealed what it was that he was going to steal that he was hinting all season. Fans speculated all season as to what DJ would steal from Yankee Stadium...someone even suggested that he steal "the bat." I don't think his house in FL would accommodate it. Jeter took home Joe D's famously quoted sign from the locker room tunnel. I think that it is a really cool collectible for Derek to keep. Great choice Jeter!!! 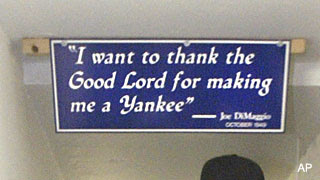 I have to say that I am totally digging the new MLB Network on cable. I really like Harold Reynolds analyses and have been a fan of his when he used to do Sunday night baseball on ESPN with John Kruk. It's really cool to relive some of the previous games. I just watched the coverage of the 2001 season, and last week I watched Don Larsen's perfect game in the '56 WS complete with Vin Scully's commentary, along with the old Gillette commercials. Vin's the best of all time, I might be a little biased, growing up in Dodgertown, but I don't think that that many people would argue against me. It will be really cool to be able to watch the WBC in English this time on the MLB Network. I was forced to watch most of it in Spanish on ESPN Deportes  in '06 and needed my wife to help me out with some of the translations, especially when the announcers would speak at a machine gun rapid fire pace. Their coverage on the individual stadiums are great to watch. After G4, this is my second favorite cable channel. I can't wait to see what they do during the season. Also, Hazel's not to bad on the eyes either!
Posted by Junior75 at 17:46 No comments:

Smoltz is now on the BoSox and Glavine might be close to signing with the Nats...Gone are the days of the great rotation in Hotlanta! Glavine left and seeing him as a Met was a little weird, but not as weird as seeing Smotlz in a Braves uniform. I'd like to see Maddux, Glavine, and Smoltzy go back to ATL for at least one more run. 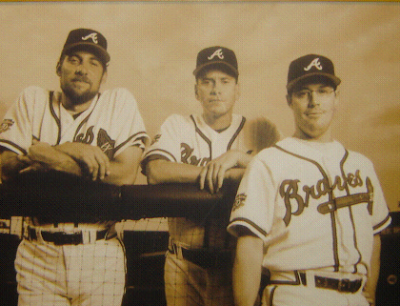 Okay, so maybe I am somewhat sentimental but after seeing former Beach star Giambi go back to Oakland, made me miss the good old days a little. I am glad to see the power of the 'stache leave NY, because he didn't really do a whole lot for the team. Teixiera is a huge improvement at 1B. At least the Cubbies are being sold to a life long Cub fan who will keep the team going and not sell off the name of the stadium, keeping it called Wrigely Field.
One thing that hasn't seemed to have changed is Man Ram's ego...he and Boras are starting to tick off McCourt by not taking their offer seriously and waiting for something better. The Mets might be looking at making an offer, but nobody seems to want to dish out more money than what he is worth. It's really just a matter of time when we he really starts being Manny again and poisons his new club, like he did in Boston. He should just take LA's offer and not hold out for more, just look at where baseball's other 3 ring circus, Barry Bonds,  has been last year...sitting on his couch. No one is worth the media circus and head aches that come along with these two. Look at Boston, they are much better off now with Bay in LF.
Posted by Junior75 at 18:14 2 comments: