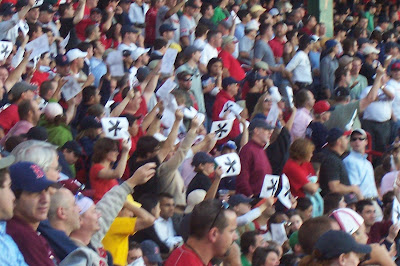 Okay, I know that I haven't written a baseball related posting in a while... but with yesterday's news about Manny and Papi testing positive for steroids in 2003, I had to get this off my chest. WTF!?!? I am so close to walking away from this ridiculous circus of a game completely. Were all of the MLB stars from the last two decades on steroids? Are all of beloved players cheaters? Are all of the Dominican players on the juice? I am so sick of hearing about these players cheating. It's really disgusting to think of the past couple decades and all of the broken records that were treasured by baseball purists. And what's up with the ridiculous stupid fans continuing to cheer for these losers? Manny comes back and gets standing ovations by almost all of the fans, except my buddy Rob, at Chavez Ravine! Aren't these the same idiots that booed and vilified Bonds just a few years ago? So it's okay if he's on your team? Trust me as a Giants fan, I didn't cheer for Bonds. And to Bonds' credit, his name hasn't surfaced from the 2003 list, at least not yet. Even the idiots at Fenway were jumping on their feet cheering for Papi after his double and HR during yesterday's game...come on BoSox fans, you are smarter than that! These are the same morons that held up asterisks signs and booed Barry at Fenway in 2007 when I was there watching my beloved Giants (see the proof above). Even most of the fans of the Bronx Bombers still cheer for A-Roid...come on people, show some respect for the game and it's history. Do something that Papi, A-Rod, Manny, at whoever's next hasn't done...RESPECT the game and it's treasured records!
So even the Curse of the Bambino wasn't strong enough to ward off the great cheaters of 2004 and 2007. What do we do, strip them of their WS titles? Put asterisks on everything achieved since 1989? No, that's not practical, but it is very very sad. I already once walked away from the game in 1994 due to the strike because I was disgusted by the players greed, but this is way worse...talk about greedy disgusting players! I didn't return to watching baseball until 2000, when my wife got me back into it. Who's next? Pujols, Howard, Ichiro, Vlady, Mo? I promise you all this...I will walk away from the game FOREVER if Derek Jeter, MLB's poster boy and fan hero, is ever found to have used steroids. I will keep my words and find a new past time. Maybe soccer or hell kite flying, why not?
Posted by Junior75 at 08:43 No comments: 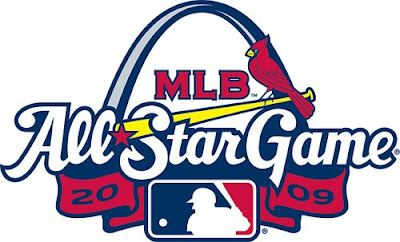 It's finally here...the 2009 All-Star game in baseball's most beautiful ballpark in St. Louis. I love the homerun derby. My prediction is Adrian Gonzales to win tonight HR derby contest. I have been to new Busch Stadium, and it is the best stadium that I have been to so far...I even like it better than AT&T Park. I will write my stadium review later on when I get to that part of the alphabet. Enjoy the festivities my friends!
Posted by Junior75 at 14:20 No comments: 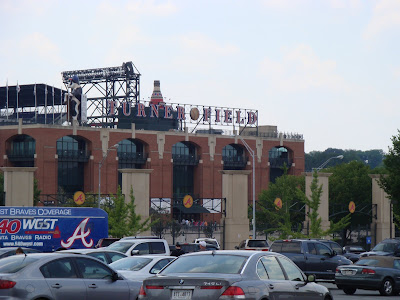 Turner Field
Year Built: 1996
Capacity: 50, 096
Surface: Grass
Cost to Build:
$209 million
Overall Grade: A
Return Someday: Yes
I apologize to my faithful readers that I haven't written a posting for quite a while, we spent a week in Atlanta, then went to Costa Rica. We were fortunate to visit Atlanta's famous Turner Field. What an experience! The stadium was originally constructed as the 85, 000 seat Olympic Centennial Stadium for the 1996 Summer Olympic games. Immediately afterwards, it became the new home to the Atlanta Braves after some modifications. The stadium's nickname is "the Ted", affectionately named after Atlanta business tycoon, and former Braves owner, Ted Turner. In the parking lot is the original outfield wall from Fulton County Stadium with te exact marking where Hank Aaron hit his 755th homer. 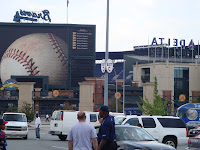 There were many bronze statues of former Braves greats like Hank Aaron in the front plaza o
utside the stadium. Once you enter, there is a huge photo of Hammerin' Hank's 755th homerun ball on the side of the stadium wall.
In the entry plaza, there is a Cartoon Network kid's zone with games and activities. The was a talented marching band playing a drumline outside which was really cool to see. 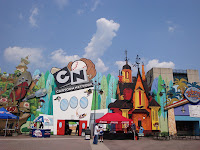 Since Atlanta is the home of Coca-Cola, there is a Coca-Cola area in the LF. They have these huge Coke bottle shaped chairs to sit in and Coke bottle cannons that shoots out smoke when a homerun is hit. 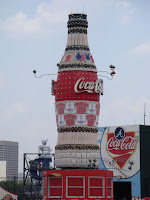 There is also a huge Coke bottle standing up that is made up of Braves jerseys, bats, and coke bottle plastic caps. The food options were really good. They had a nice restaurant that we dined in before the game. The menu was pretty much usual ballpark fare, but it was a great experience, nonetheless. We both had the pulled BBQ chicken sandwich with fries. The stadium staffwere very friendly...as they d
emonstrated that famous southern hospitality. This was pretty much universal throughout the city as well. It was a very humid day with the temperature at 94 degrees, which doesn't seem all that bad, but with the humidity, it was pretty brutal. I have never experienced humidity like this before in my life. Before the game, we took a tour of the stadium and the Braves Hall of Fame museum. Both were very interesting and historical. We got a free foam tomahawk to do "the chop." We never did "the chop" because we were actually rooting for the visiting team...luckily for us, the Yankees were in town! The Yankees won by the way. The fans were very friendly, showing their southern charm. The seats were very comfortable. Apparently Coca-Cola isn't the only company based out of Atlanta. Chik-Fila is a hometown favorite and they have a few Chik-Fila concession stands, but even better, they have a 25 foot tall cow standing up holding a sign and a wearing a Braves cap. He does the tomahawk chop with the crowd when they play the chop music. It was really cool seeing that. 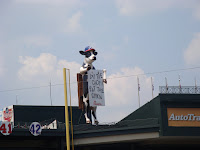 We truly enjoyed our Turner Field visit, and would definitely go back if we were ever in the neighborhood. We also toured the World of Coca- Cola, CNN, Centennial Olympic Park, and the sweet Auburn neighborhood where we saw Martin Luther King Jr.'s birth house and his final resting place. If you've never been to Atlanta, Georgia, treat yourselves and make the trip. You won't be disappointed, I promise. 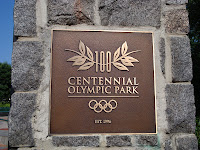 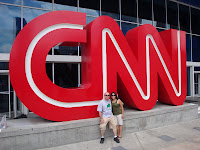 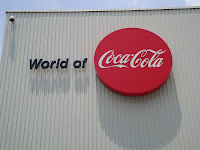 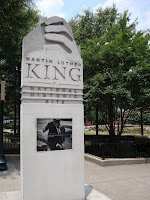