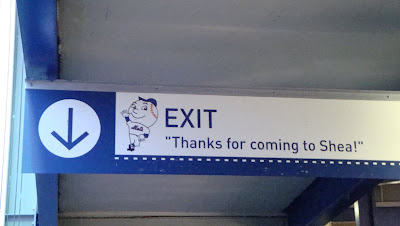 That's all folks...for the NY Mets. Unfortunately they blew it again for the 2nd year straight by falling apart at the last minute to miss the playoffs. Now who's to blame this year? They don't have Willie Randolph to use as their scape goat this time.  Maybe the problem isn't with the manager at all, but with Omar Minaya...and he's getting a fat contract renewal after this season! Go figure that one out. Shea goodbye to the Mets again this year and hopefully they can do better in their new ballpark, Citi Field, in 2009. Until then, Mr. Met will have to watch the mediocre Dodgers, Brewers, and Phillies struggle against the Cubbies in the inferior league's playoffs. Lou Pinella's Cubs will be the NL champs, and hopefully break their 100 year drought from their last WS win in 1908.
On the flip side, the AL playoffs seem a little more interesting with the Rays, Angels, BoSox, and either the ChiSox or Twinkies will be heating up October. Hopefully the Twins will beat out the southsiders for the AL Central...I really can't stand the loud mouth Ozzie and the cheating, cry baby AJ to see in the playoffs this year. It would be a nice treat to see the Twins in the playoffs, especially since they had low expectations placed upon them after losing Johan and Torii. The AL champs will be, the 2002 WS champs, the LA Angels of Anaheim.
Since my Yankees aren't in the playoffs for the first time in 13 years, man Joe Torre sure is missed, my playoff team this year will be the Chicago Cubs. I believe! The fans, the organization, and historical Wrigley Field deserves this, and what a fitting time to win it on their 100 year anniversary of their last WS win. 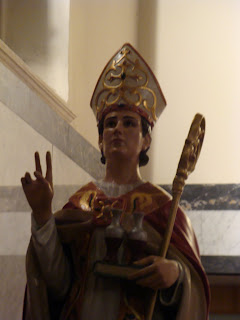 Last, I went to the San Gennaro Feast in LA today for the very first time, I can't be more disappointed. I loved my San Gennaro experience two weeks ago in Little Italy, NYC, and thought it'd be cool to do a comparison. The LA copy version of the event was so small in size with only a handful of vendors, maybe 100 yards in length in total...whereas, the original eastcoast version had dozens of vendors that went on for blocks, covering the entire span of the Little Italy community. Also, the pizza sucked at the LA event...LA has so much more to learn about food, and celebrating the Italian American culture. Keep trying Jimmy Kimmel, hopefully, you and Adam Corolla will get it right someday.
Posted by Junior75 at 19:53 No comments: 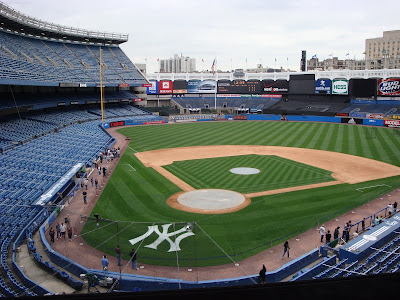 It's finally over...I can't believe that the world's most famous sports venue is finally gone! The final game played in "The House That Ruth Built" occurred yesterday, and it was a very emotional event for all. I got choked up by just watching the pre-game festivities, game, and post-game event. Seeing Jeter give his speech as the captain after the game, and the Yankees making a lap around the stadium to honor the fans was done in the typical classy perfection expected of the  Yankees. Hearing all of the fans, former players, and celebs give their memories of the Stadium was a very moving event. I was very impressed on the great job that ESPN did on the entire day's coverage of the event, in addition, it was a nice touch that ESPN allowed the hometown YES network Yankees broadcaster to do the 7th inning play-by-play. Babe Ruth hit the first homer in the Stadium's debut in 1923 and Jose Molina hit the last homer in 2008. It saddens me to think that the existing stadium will be gone forever, with all of the history it's had. That's a hard act to follow for the new Yankee stadium. Just think, baseball's history existed in the 85 year life-span of Yankee stadium. Next time that I go back to NY, hopefully next summer, Yankee stadium will be completely gone and turned into youth baseball fields. Too bad the existing stadium couldn't be kept standing as a museum/ tourist attraction, just as the Colosseum still stands in Rome. Yankee stadium is America's colosseum and should be honored as much. Unfortunately, I have only been able to attend games in Yankee stadium twice in my lifetime, but conversely, God blessed me to be able to see Yankee stadium in person, not only once, but twice in my lifetime. Many people do not even get the opportunity to see it once, except for on TV, which doesn't give you the same feel. Yankee stadium, you will truly be missed and always loved by those who got to know you in their lifetimes. At least we have our pictures and fond memories to allow you to live on! 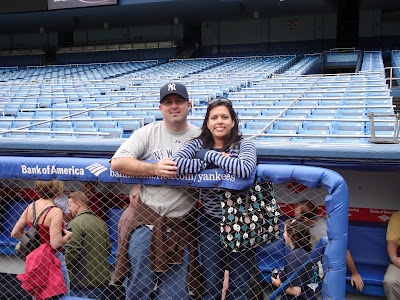 Well, we just got back to Cali from the Big Apple and we had a blast! I hated to come back. It was the best trip we have ever taken, in my opinion. We went to Ground Zero on 9/11, saw all of the sites (Empire State Bldg, Statue of Liberty, Ellis Island, Times Square, etc...), not to mention going to a couple of ball games (one at Shea and the other at Yankee Stadium). I have never felt more American than I did on that trip. We stayed in Queens, not too far from Shea and would take the buses and trains everywhere. We even had an extended stay on 125th Street (Harlem) when the 4 was evacuated due to a sick passenger, and had to wait about 40 minutes for another train to come. We became very familiar with the 7 train and the Q48 bus during our week long stay. The cops in NYC are actually friendly when you ask them for directions. 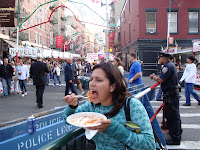 The timing of our trip was perfect...we went to Little Italy and the San Gennaro Feast was going on. Talk about feeling a huge appreciation for my Italian American pride and the Italian American community of NYC. The pizza, baked ziti and cannolis were the best that we had ever tasted!
We got to see monument park during our behind the scenes tour of the Stadium. Talk about an amazing and historical place. 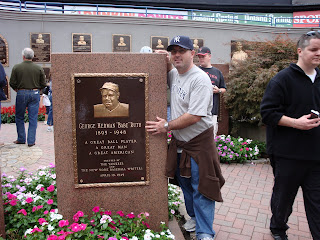 The new stadium was almost complete right next door to the House that Ruth Built. Same for Citi Field was almost done next to Shea. Both of these will open for use next season, and the old stadiums sadly would be torn down. 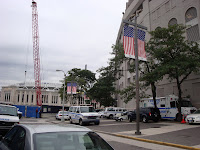 We had really pimp seats at Yankee Stadium...we were right behind the Yankees dugout, 5 rows from the field. 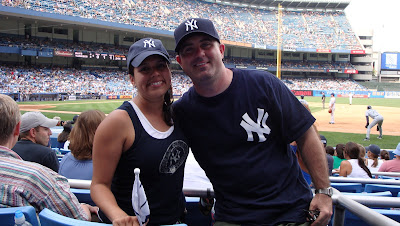 We got to see Jeter tie Gehrig's all-time Yankee Stadium hit record, A-Rod hit a grand slam, Giambi hit a homer, and Mariano Rivera came into the game with Enter Sandman blaring over the house PA system to close the came out. The Yanks beat TB 8-4.

We can't wait to go back again next year to see the new stadiums!
Posted by Junior75 at 14:58 No comments:

Okay, I making my 2008 World Series Preditiction a little early this year, but I am confident on who the contenders will be...Cubs vs. Angels- with the Cubs winning in 6 games! I think that they will finally break their curse.
Posted by Junior75 at 13:33 No comments:

I know that it's been a while since my last posting...it's been pretty hectic around here. Had a great weekend in AZ for Eddie's bachelor party. Saw the D-Backs lose to LA, Man Ram hit 2 homers out! We also got to see the AZ Cards lose to Denver in a preseason game in last year's Superbowl site. The USA men's Olympic baseball team ended up beating Japan for the bronze medal, where the incredible undefeated Korea team won gold over Cuba.
Now it's almost that time...for our trip to NYC! We are going to see a final Shea Stadium game with the Mets playing Hotlanta and if that wasn't enough, we get to see Jeter and the Bombers versus the red hot Rays from some really pimp seats in the final season of House That Ruth Built. We've been planning this BIG trip for over a year, and I can't believe that it's finally here.
Stay tuned kids, same bat-time, same bat-channel...
Posted by Junior75 at 17:55 No comments: