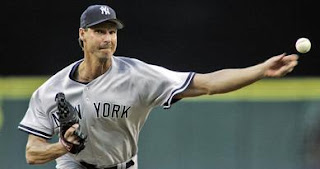 Well, there he goes again, keeping with tradition, getting another old dude to fill the team with! But alas my fellow black and orange fans...the Bay Area native still has it in him. It's only an 1 year/$8 million deal. If Bochy is smart, he will put Randy Johnson in the pen as their closer. He should last longer by throwing 1 maybe 2 innings in the games that they are winning...based on last season, it shouldn't be very often. Hopefully that turns around this season. Especially since he had two recent back surgeries. We saw him pitch last season in Tempe during spring training and he was lights out against the Angels. I have to say that I am very excited about this move. This is the first move that the Gigantes have made in a very long time that I am actually excited about. Lincecum, Cain, Lowry, Zito, and Sanchez in the rotation and Big Unit closing it out at baseball's best address...not bad, except for #4.  Now if they could sign some decent bats during the off-season to give some offense for Unit to come in for a save opportunity.
Posted by Junior75 at 09:00 No comments: 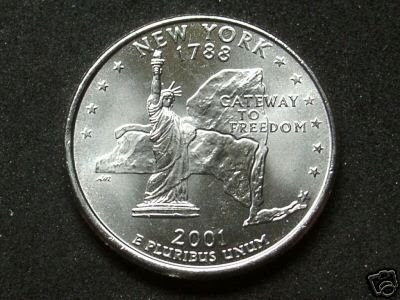 I guess the economic woes haven't hit the New York Yankees. At least they don't act like it has with signing Teixeira, Sabathia, and Burnett to long FAT contracts. Steinbrenner is spending money like there's no tomorrow. With low sales on the new cathedral's luxury boxes and they just got hit with a huge $27 million luxury tax by MLB this week, it is surprising that they can still keep going like this! Conversely, they are offering 25 cent bleacher seats for their first two exhibition games at the new ballpark...how generous of Steinbrenner to go back to the 1923 bleacher seat price of a quarter, just in time for Christmas! They are making it really affordable to anyone, even those fans living in Washington Heights. But once the season gets started, those same seats will go for $2500 leaving the average joe to get priced out and have to watch the games on YES and MY 9 at home. I guess the Steinbrenners need to keep those prices consistently high to make their payroll...not to mention they will sell a crap load of new CC, AJ, and Teixeira jerseys wit their new Yankee Stadium inaugural season patches. They have to pay their big contracts and their end of the mostly publicly funded new stadium some how. Teixeira will be a big improvement at first base replacing Giambi. Hopefully they will get Andy Pettite on board for next season...he shouldn't cost too much money, in comparison. I'm calling it now, the Yankees win the '09 WS, ending their 9 year drought.
Posted by Junior75 at 10:11 No comments:

The National League (aka, the "inferior league" as I like to call it) should wise up and go with having a DH...not such a popular idea with the purists, but it's time for the NL to get with the times. The American League began using the designated hitter position on Opening Day 1973. The theory itself was developed much earlier and historians have found an instance where Connie Mack made a case for the position in 1906. In 1928 National League President (1918-1934) John Heydler wanted to bring the DH to the senior circuit in an attempt to speed up the game, but the idea was rejected during the Winter Meetings. Two early attempts that failed, but on Opening Day 1973, Ron Blomberg of the New York Yankees became the first designated hitter in the history of baseball starting a three-year experiment that has lasted more than twenty-five years. The DH provides the fans a better game by watching the best pitchers vs. the best hitters throughout the game.
I will give my top ten reasons why having the DH is best for the game of baseball:
10.) It keeps the game exciting for fans by having another power hitter in the lineup.
9.) It extends the careers of great hitters (like Tony Gwynn, Frank Thomas, and Paul Molitor) who can't manage the wear and tear of the long season due to age.
8.)  Once the pitchers get to the Bigs, they suck at hitting and base running- (Chien Ming Wang)
7.) All of the top contenders have them. (BoSox, NYY, ANA)
6.) What's better? A sac bunt or a mile-long blast into the upper deck by Harold Baines.
5.) The DH is used in most professional leagues around the world and in all NCAA games.
4.) The DH position is used for injury recovering players to help get in game shape.
3.) The DH position is used to give players a partial day-off, giving them some rest while the other team is batting.
2.) The DH removes the "easy out" that a batting pitcher provides.
1.) Big Papi...need I say more? 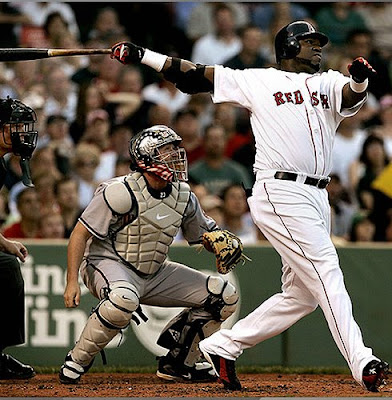 I'm tired of all of these Jeter-haters out there, so I created this list to demonstrate DJ's accomplishments. He is what all MLB players should aspire to be. He has class, and gives a 110% in every game...he plays the game the Yankee way.
These are the top 10 reasons why everyone should give the Yankee Captain respect:
10.) Drafted by NY out of high school in 1992, he never needed to play college ball.
9.)He has spent his entire career with the Yankees, starting in 1995 when he was 20 years old.
8.) In 2000, he became the only player to win both the All-Star Game MVP and the World Series MVP in the same year.
7.) He is a 9 time All-Star shortstop.
6.) He won the AL Rookie of the Year in 1995.
5.) He has won 3 Silver Slugger Awards.
4.) He is a three time Gold Glove Award Winner (the most recent award was in 2006).
3.) He has been in the top seven in the AL in both hits and runs scored for nine of the past 10 years.
2.) His .317 career batting average through the 2007 season ranks him with the 5th highe
st lifetime batting average of all active baseball players.
1.) Derek tied "Iron Horse" Lou Gehrig for the most hits at Yankee Stadium (1,269) with a homerun off TB pitcher David Price on 9/14/08 (that's the game we were at). Two days later, on 9/16/08, he went on to break the record off of the Chi Sox pitcher Gavin Floyd. A record that will never be broken, since Yankee Stadium is no more, and it will not carry over to the new stadium. 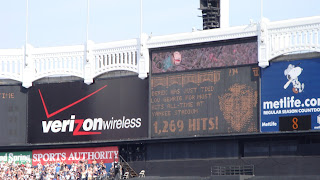 Honorable mention of accomplishments that didn't make the top ten list:
- 4 time World Series winner.
- He is only one of two MLB players sponsored by Michael Jordan (The other is Andruw Jones).
- He represented Team USA as the starting shortstop in the WBC in '06 (batting .450)including  the upcoming '09 tournament.
- Has dated: Mariah Carey, Miss Universe Lara Dutta, Jordana Brewster, Brazilian supermodel Adriana Lima, Jessica Biel, Vanessa Minillo, and Minka Kelly. Not to mention rumored to have dated Jessica Alba, Scarlett Johanson, and Tyra Banks...what a PIMP !!!
- Appeared on SNL.
- He has been on the Simpsons and Sesame Street.
- He is part owner of three 24 Hour Fitness clubs in NYC.
- My wife, along with most red blooded American women think "he's so wonderful."
Posted by Junior75 at 14:27 3 comments:

CC and K Rod to NYC and Jeter's USA

Okay, so it's cool that the Yankees signed CC, but I don't agree with such a lengthy contract...7 years!? Did the Steinbrenners not learn anything from the Zito debacle? The only difference is that Sabathia is in his prime and Barry was past his prime when the deals were signed. If my last name was Steinbrenner, I would have offered a 3 year/ 65 mil., or maybe a 4 year 80 million dollar contract. I like it that the Bombers got Burnett from TOR for 5 years. That will be a great rotation with CC, Burnett, Wang, Pettite, and Joba. Wow!!! Maybe a championship during their first year in their new stadium...The House that Jeter Built. The Yanks won't have to worry as much about ANA because they just lost K-Rod to the Mets...take that Scoscia! 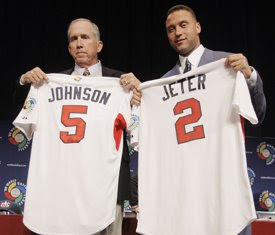 Speaking of the Prince of New York and MLB's poster boy, DJ just announced that he will return as the starting SS for Team USA in the WBC...I think that the US will go to the finals at Chavez Ravine and not embarrass themselves like they did in the '06 WBC. Especially since they won't have the Big Choke, Madonna's boy toy at third taking up space. The US born A-Rod announced that he will play for the DR this time, a decision that he struggled with 3 years ago. I would like to see David Wright at the hot corner for the US, giving a much improved IF left side. I know that the DR is always a power house, but come-on...Alou is managing??? Lame!!! And no Vlad Guerrero again. I don't think that they will go much past the 2nd round this time.
Even my pisan, Tommy Lasorda, will be involved...serving as the '09 WBC's Ambassador...that's pretty cool! I like the US's manager's choice this year, Davey Johnson, is much improvement over Buck Martinez. Johnson led the US Olympic team to bronze in Beijing a few months ago and is a proven leader. It would only be better if Torre was managing the team, but Johnson is a great choice! Buck just needs to stick with doing TV commentary and leave the managing to the experts. I can't wait for Toronto and hopefully I can catch a game at Chavez Ravine in the finals. Keep your ears to ground my friends!
Posted by Junior75 at 08:59 No comments:

The Giants just signed Edgar Rentaria to play short, which solidifies that the aren't going to resign the Venezualan legend Omar Vizquel. The future hall of famer played for the Giants for 5 years and even though he's 41 years old, he still can bring a solid gold glove to the short stop position...I would suspect that someone will sign him, and be very lucky to do so. Omar will truly be missed, he was my favorite Giant player, since JT Snow retired a few years back.
I'm not sure if Sabbean made that great of a decision, replacing one old guy for another at short stop. I would have kept Vizquel for a couple of more seasons and tried to get a homegrown youngster from the farm system. Sabbean really makes some dumb decisions, like the ludicrous Zito contract and keeping the Bonds' circus going for way too long. Not to mention getting lame ass Bochy as the manager...they should have got Bud Black instead. But I think his worst mistake was trading away Liriano and Nathan to the Twins. I'm surprised that he hasn't tried to ship Lincecum off for some lame ass wash up. Really, getting Rich Aurillia back? Sabbean sure likes collecting old dudes! He makes it difficult to stay a Giants fan. Take some management lessons from Steinbrenner for Pete's sake!!!
Posted by Junior75 at 11:13 1 comment: