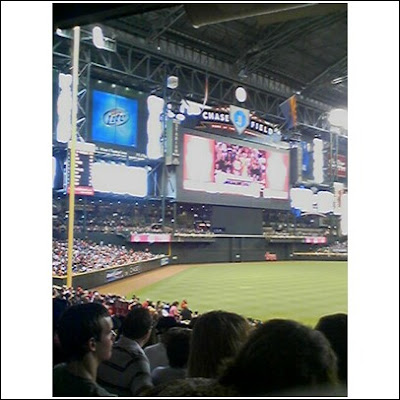 CHASE FIELD
Year Built: 1998
Capacity: 49, 033
Surface: Bull's Eye Burmuda
Cost to Build: $354 million
Overall Grade: B+
Return Someday: Yes
I was fortunate enough to attend a D-Backs home game last season with a bunch of my lifelong buddies. We were in Tempe for my friends Eddie's bachelor party. Since Manny and the Dodgers were in town, and all of my friends are Dodgers fans, we decided to go to the game. I was the only one of the group rooting for the home team, due to my hatred towards the Dodgers. The stadium in Phoenix was the site of the 2001 World Series, where the Diamondbacks beat the Yankees in a heartbreaking game 7. Chase Field was built in 1998 and has a retractable roof. The roof was closed when I was there. They have a TGI Friday's inside where you can dine and watch the game. The TGI Friday's has a bunch of memorabilia throughout on display with a bar and outdoor balcony seating to watch the game. It's definitely worth checking out. They are even open year round. I ate at the Fatburger inside the stadium, and it was awesome! I had the turkey cheeseburger and fries which was a greasy delight. There are so many different types of food places to eat like pizza, mexican, hotdogs, sandwiches, etc... It's definitely one of the more better stadium eats that I have been to. I was glad that the roof was closed, because it was in the high 90's outside that day, and it was very comfortable with the AC on inside the stadium. The seats seemed a little crammed, but then again, I was with a lot of friends that live large and fill in their seats well, so, I won't judge it that much. Chase Field is definitely a family-type atmosphere with a kids zone and they have their 2001 WS Trophy on display. The stadium staff was very friendly. The D-Backs fans were friendly and didn't give my friends a hard time for cheering for the visiting team and being decked out in Dodgers gear. Unfortunately, Man Ram and the boys in blue finished off the D-Backs, but a great time was had by all. I would definitely go back again!
Posted by Junior75 at 10:55