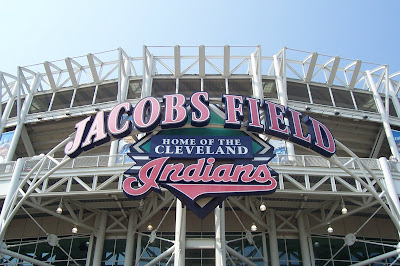 Cleveland ROCKS!!! We went to the Jake in 2007, now called Progressive Field. It was one of the best family atmosphere's that we have seen in a ballpark. Jacobs Field was pretty cool to see. The franchise is one of the older teams in MLB and the fans show their constant devotion for this team. I actually have a lot of respect for this franchise and their devoted fans. The fans were friendly, the stadium workers were friendly, and the food options were good. The stadium is kinda bland looking. The seats were comfortable. The national anthem was sung by the Bare Naked Ladies rock group. Heritage Park was neat to see, as the Tribe honored their historical past. You could hear the drum beating in the crowd. It was a great midwest summer afternoon and the Indians won. I recommend checking out the Jake, if you've never been, and bring the kids!
Posted by Junior75 at 10:55