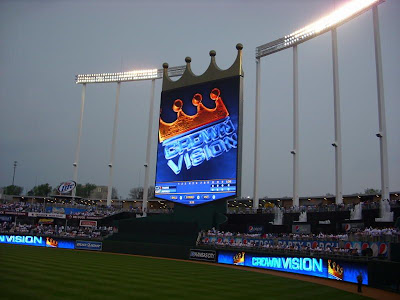 Kauffman Stadium is now MLB's 6th oldest stadium, built in 1973 and received a $150 million renovation in 2009. It is located in the Truman Sports Complex, which also has the Kansas City Chiefs stadium adjacent to Kauffman. It is named after the Royals original owner, Ewin Kauffman. Kauffman Stadium has had it's historical moments over the years. It's first began on 5/15/1973, as only one month old, hosted Nolan Ryan's first of seven no-hitters. Kauffman also hosted it's only All-Star game during the inaugural season. Kauffman Stadium has hosted two World Series in 1980 & 1985.

I really enjoyed my 2006 trip to Kauffman, and I would like to take the opportunity to share with you a story about how I have received the "Royal treatment" by the Royal's organization. The Royals staff are truly a class act. We brought my parents on this road trip to see Johan's Twins against the Royals, and I had bought some nose bleed seats directly behind home plate. The height of the seating area above the field became too much for my lifetime Twins fan mother, due to her uneasiness with heights and we went to speak to the Royals customer service reps. They gladly swapped our tickets to bottom level seats right behind homeplate for no extra charge. This was a big-time upgrade. I have a lot of respect and gratitude of the Royals' staff for doing that for us. This wasn't the first time that I was given the "Royal treatment" by the Royals staff. When I was about 14 years old, I wrote to practically every baseball organization requesting my favorite players' autographs. The only team to respond back was the Royals. They sent me autographed pictures of George Brett, Bo Jackson, and Kevin Seitzer. I actually still have them. The stadium staff were the friendliest in MLB that we have encountered so far. The food options were pretty standard ballpark fare, the ballpark seating was very comfortable and the stadium's ambience was very pleasant. The fans were just as friendly as the Royals staff, even if you are sporting a visiting team's gear. A special THANK-YOU to the Royals organization. The other MLB organizations can definitely learn a thing or two of what I have dubbed as the "Royal treatment." I tip my cap to you and look forward to returning someday in the future.