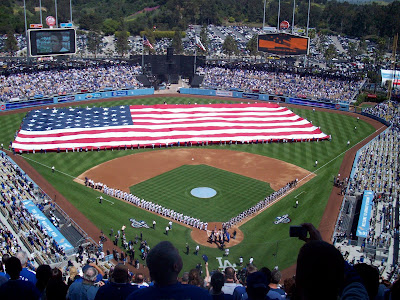 Dodger Stadium
Year Built: 1962
Capacity: 56,000
Surface: Grass
Cost to Build:
$23 million
Overall Grade: C+
Return Someday: Yes
Dodger Stadium, baseball's largest seating capacity stadium and third oldest ballpark, is located in Chavez Ravine in the heart of Los Angeles. Let's face the facts...the Dodgers are and always have been LA's true team. Growing up in LA, this is where I attended my first ballgame as a kid, where I saw the Houston Astros against the Dodgers in 1985. I remember seeing the blue and orange seats, and thinking that the Dodger fans sat in the blue seats and only Astro fans sat in the orange seats. I remember as a kid, stopping the LAPD patrol cars that would drive down our street to get LAPD Dodger baseball cards from them. I love listening to Vin Scully on the radio or on TV. It's really cool that he has been the voice of the Dodgers since the 1950's. Vin is by far the best baseball broadcaster in the majors. His voice can be heard echoing throughout the stadium during a game, due to many fans traditionally bringing their am transistor radios to the game. "It's time for Dodger baseball..." It will be hard to imagine watching or listening to a Dodger game without him. The Dodgers have honored Vin by naming the Press Box after him. If you get to the stadium early, you can catch Fernando Valenzuela for an easy autograph outside of the Vin Scully Press Box, before he begins his Spanish radio broadcast of the game. The Dodgers have a lot of tradition. They have the history from their Brooklyn days with Jackie Robinson, to playing at the LA Coliseum, to Tommy Lasorda, to Koufax, to world famous Dodger Dogs, to Fernando-mania, to beachballs, to Kirk Gibson, and four WS championships...just to name a few. 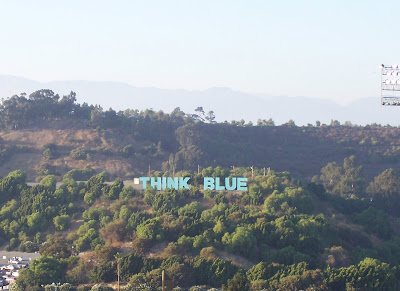 With that said, this is a stadium review, not my walk down memory lane!!! So, putting aside my fond childhood memories, I am going to do my best to give Dodger Stadium an impartial review. Depending on what day of the week, your experience of the stadium can vary greatly. If you want the best overall experience, go to a weekday daytime game, if possible. It doesn't get very crowded, but most importantly, the typical Dodger fan knuckleheads aren't there. If you don't know what I am talking about, think of typical Raider fans, and bingo, there you have it. This is a must if you are looking to bring the kids or are trying to root for the visiting team. I strongly recommend NOT wearing any visiting team gear at all, unless you don't mind get messed with, and possibly assaulted. You can avoid the profanity, fights, and potential physical harm. I have seen fans get in fights and there was even a fellow Giants fan that got shot while I was at Dodger Stadium. At all costs, avoid the outfield pavilion seating, as this is where the trouble makers like to sit. If you must go to a weekend or weekday evening game, remember, the lower & pricier the seats are, the safer you will be. If you are looking for a good family weekend outing, either shell out the bucks for lower section seating or drive down the I-5 to Angel Stadium. As far as the stadium staff, they aren't very fan friendly at all. The could really use some customer service training, especially if you are sitting in the top deck section. The food has gotten much better over the years, but still has a ways to go. Try a world-famous Dodger Dog at the game. Make sure that you get a grilled Dodger Dog, they are much tastier, than the regular ones. The grilled dogs aren't sold everywhere, so you will have to hunt a little for them...trust me, they are worth it. One of Dodger Stadium's best kept secrets is the Stadium Club. This is a bar and restaurant that is open to the public before and after the game. It overlooks right field. If you want to eat there during the game time, you will need a special pass and reservations to get in. Season ticket holders are given a couple of these passes, so thanks to my buddies, Eddie & Robert, I have had the privilege to watch a game while dining in the Stadium Club. It is a really cool, high end type experience.

I would have rated Dodger Stadium a little higher if the fan factor wasn't such an issue, but at least you know what to expect, when you go to watch one of baseball's historic teams in Chavez Ravine.
Posted by Junior75 at 13:25